english
polski
search
video.wrocenter.pl / From Monument to Market ↑
→
Introduction to the Internet Edition (2013)
→
Foreword to the first edition (2005)
→
Piotr Krajewski
From Monument to Market
→
Andreas Broeckmann
Public Production: Constructing the Public Sphere
→
Erkki Huhtamo
From All-Embracing to Ephemeral: The Art of Public Interventions
→
Stephen Kovats
Video as Art: An Infra-thin Electromagnetic Wedge between Art and Politics
→
Marielle Nitoslawska
Monument. Market. Manhattan
→
Łukasz Ronduda
Subversive Strategies in the Media Arts: Józef Robakowski’s Found Footage and Video Scratch
→
Margarita Schultz
Some Remarks About Video Art in Poland
→
Bojana Pejic
Girls in Town: A Gloss About the Past
→
Dieter Daniels
Why We Need a DVD Publication About the History of Video Art
→
Piotr Krajewski
From Monument to Market: the World Re-Coded
→
Colophon
title
Monument. Market. Manhattan
author
Marielle Nitoslawska
author's bio
Marielle Nitoslawska was born in Canada but lived in Poland from 1977 to 1986; she is a graduate of the Cinematography Department of the Polish National Film School in Łódź. During this period, she worked closely with several members of the Film Form Workshop, participated in many underground artistic events in Łódź and was one of the co-organizers of the Construction in Process exhibition in 1981. After returning to Canada, she began teaching at the School of Cinema at Concordia University in Montreal. Her extensive filmography, produced in Poland, Mexico and Canada, includes numerous films about art and reflects her preoccupation with the crossbreeding of cultures. Her work focuses on new approaches to documentary, on the relationship of technology to cinematic discourse, and on determinant modes of subjectivity.

The title From Monument to Market implies a shift of direction, a movement, a radical change, bidding the question of boundaries between beginnings and endings. The ending of something could last as long as the thing itself … The famous images of decapitated revolutionary heroes, stone limbs strewn all over the ground, speak of the symbolic end of an epoch. It is one thing, however, to change the street sign, and another to transform the street. 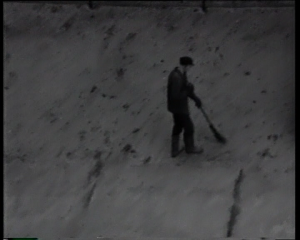 FROM MY WINDOW Józef Robakowski

The appearance of a significant body of independently produced video work from Poland represents the beginning of such a transformation. It signifies a momentous paradigm shift, as compared to the situation 25 years ago, when Jozef Robakowski began filming From My Window, the earliest piece in Monument to Market. In 1978, Robakowski’s Manhattan diary may well have been the only film made in Poland outside of any official institutional context. The piece is also unique in tone, content and form and could have never been made within the confines of a state-run production unit. Robakowski’s obstinate autonomy enabled his discourse — by its particular mode of production — alone with his camera, in his own space, on his own time. Change the mode of production, and the discourse will also change. The fact that it has become somewhat easier to produce independent media-based work in Poland today comes as great news. Alternative discourses are vital in the reconstitution of a society that has been firmly molded by monolithic doctrines and conceptions since the last World War.

Overlooking the qualitative differences of formal constructions within the selection, the works in Monument to Market can initially be read as a layered text narrating the ambivalence towards the transition from one Empire with its monuments to another, with its markets, with the excitement of newly acquired liberties strangely absent. The works are dark, the tension palpable, and the edges rough, in keeping with the long-standing practice of the Slavic soul. 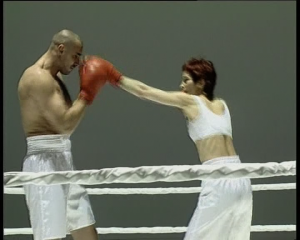 However, a second reading delivers other dimensions. The works in Monument to Market resonate with a refreshing authenticity, while uncovering reflections about public space that remain “unspeakable” in Polish mainstream media. “Official discourse” is understood here as forming an integral part of the fabric of public space, shaping its parameters and its identity. It can be argued that in today’s Poland, the stronghold of a monomorphic discourse still endures, creating the appearance of a homogeneous national identity. From Monument to Market’s survey of independent media art from the late 70’s to the present gives power of speech to alternative voices, which point to the cracks in the seams of this seemingly uniform space.

Variations on the subversion of authority, power and control constitute the most striking aspect of the survey. For example, in Art is Power (Jozef Robakowski, 1985), the Empire’s military self-image is mocked; Lock Up Mandela! (the Lyyying Community, 1991) and We like it a lot (the Azorro Group, 2001) tackle the mono-culture’s conformity of outlook on issues ranging from racism to art; Proteo (Mirosław E. Koch, 1991) and Fight (Zuzanna Janin, 2002) subvert sanctioned icons of identity, from religion to gender; Faster, Easier (Monika Grzesiewska, 2002) playfully attacks the new culture of commodification.

In the early works from the 70’s to the mid-80s, the observing camera is prohibited by law from public spaces. It hides in the safety of private interiors, and engages with the unfolding political reality through apartment windows or through the “public window” of State television’s monopolized news. In the early to mid-90s, the bubble finally bursts and the cameras hit the streets energetically involving people in public with provocative actions, interventions, and critical observations. From the late ’90s to the present, the tone eases, the work becomes more reflexive and conceptual, approaching new themes relating to notions of power and authority as determinants of identity.

When considering the relationship of independent media art to the public space, the key questions concern access. The issue of the right to use a camera in public spaces has been resolved in Poland with the change of political regime. Nonetheless, access to the means of production and distribution remains a fundamental question, yet to be resolved. The potential for the democratization of public discourses by the independent use of new media technologies has been amply demonstrated. As far as Eastern Europe is concerned, it is worth remembering the interesting historical coincidence that the collapse of the Berlin Wall concurred in parallel with the popularization of camcorder technology. A little over a decade later, in countries like Canada, it has become possible to equip oneself with basic independent production tools with only one month’s low-wage income. The situation in Poland still lags far behind, yet such a possibility is at least already in sight, which it certainly wasn’t 20 years ago.

In the rich countries where new digital technologies are readily available, preoccupations have shifted to the central issue of dissemination of innovative media work. The overwhelming quantity of independently produced material has given rise to a proliferation of festivals, exhibitions, as well as other new venues such as commercially driven art markets. In addition, it has produced a new breed of curators and agents whose function is to sift through this vast output with the aim of conceiving selections for programming venues. At their best, these new “middlemen” provide clarity and vision in a confused post-modern landscape. At worst, they form another layer of gatekeepers for vested-interest agendas, maintaining the present status quo of Art as Market. 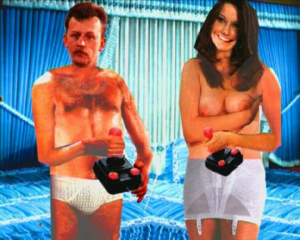 THE GAME from the series WELCOME IN CYBERSEX Janek Koza

Artists who wish to engage and exist in the public sphere with their work are increasingly required to spend ever more time and individual resources on the packaging and promotion of their work, employing commercial marketing strategies such as websites, media kits, etc. The gap between the haves and the have-nots is growing in the art market, as is in all spheres of economic activity in  the world. Leading art journals such as Art Forum, who once provided a vanguard critical voice in relation to the status quo, have now become glossy advertisement magazines working on behalf of the market system.

The solution for smaller and poorer countries like Poland, who have moreover been left out of the loop of western art for political reasons since the war, is to promote the formation of new and decentralized structures such as artist-run centers of access, based on free association and principles of self-determination. Such cooperatives would be in a position to form their own independent networks with analogous groups, both nationally and internationally, thereby setting their own cultural agendas and bypassing the layers of gatekeepers in the art world.

WRO provides a most welcome and praiseworthy model. In a country the size of Poland there should at least be a half-dozen other such centers promoting a plurality of contexts, views and approaches to new media. This is obviously an unlikely scenario for the immediate future, given Poland’s present economic situation. However, the challenge for the future will consist of formulating national and regional cultural policies which will aim to promote the restoration of a plurality of voices in Polish culture, which have been severely lacking not only in mainstream discourses, but also, albeit to a lesser degree, in the more marginal ones.

From all accounts, the state of Polish culture presently appears to be in disarray. To many foreigners, who know and respect the great Polish tradition of art, the situation of its apparent disintegration is incomprehensible. From the perspective of an inside-outsider like myself, the system ran out of steam internally, not only because the high state subsidies for culture were cut, but because the system closed in on itself, preventing a dynamic social evolution. This is not to say that the well is dry, but that the adaptation to the complex nature of modernity is a long and winding road. Initiatives such as From Monument to Market contribute on the right side of the balance, not only by facilitating access to new media for Polish artists and encouraging international exchanges, but also for promoting new syntaxes of discourse.

Speaking of syntax and vocabulary, it would be high time to lay to rest the term “video art” from the vernacular of contemporary art, where it has lodged itself for over 20 years.  The notion was needed initially, to establish a separate territory from cinema. At its inception, few theorists were as clear as Gene Youngblood, who, with Expanded Cinema (1970), wrote the first book about video as an art medium, and became influential in establishing the encompassing field of media arts, as well as the Media Democracy movement. Today, with the multiplicity of image supports and the manifold possibilities of crossbreeding between them, it’s obvious that the term ‘video art’ no longer holds water, and that the essential categorization of the visual arts by medium is a misunderstanding.

Rewind to the beginnings of “video art” in Poland. Józef Robakowski’s From my window, begun in 1978, is the earliest and most emblematic piece in Monument to Market, and is the only example I know of where Video Art actually began on Film. In the ’90s, when Robakowski resumed his diary with his video camera perched from his window, the transition is seamless. The immediacy, the frontality, the “cold” visual aesthetic often associated with video fits like a glove with the earlier celluloid material, which anticipated it by more than a decade. An even more radical example making obvious that unnecessary boundaries serve no purpose is the even earlier Robakowski film I’m going, a Structural Cinema classic from 1973. Shot in 35mm, it prefigures in a direct way his ongoing series Video Performances.

In the year 2000, during the last filming of From my window, when his prized parking lot is finally demolished by the construction of a new capitalist joint-venture, Robakowski ends his 22-year diary with the ambivalent exclamation koniec filmu, which not only means “end of film” in Polish, but can also mean game over — the end of memory — the end of cinema. A fitting and ironic beginning for Polish media art, which doesn’t need to rewrite its history, given the richness of its own originating sources.