english
polski
search
video.wrocenter.pl / From Monument to Market ↑
→
Introduction to the Internet Edition (2013)
→
Foreword to the first edition (2005)
→
Piotr Krajewski
From Monument to Market
→
Andreas Broeckmann
Public Production: Constructing the Public Sphere
→
Erkki Huhtamo
From All-Embracing to Ephemeral: The Art of Public Interventions
→
Stephen Kovats
Video as Art: An Infra-thin Electromagnetic Wedge between Art and Politics
→
Marielle Nitoslawska
Monument. Market. Manhattan
→
Łukasz Ronduda
Subversive Strategies in the Media Arts: Józef Robakowski’s Found Footage and Video Scratch
→
Margarita Schultz
Some Remarks About Video Art in Poland
→
Bojana Pejic
Girls in Town: A Gloss About the Past
→
Dieter Daniels
Why We Need a DVD Publication About the History of Video Art
→
Piotr Krajewski
From Monument to Market: the World Re-Coded
→
Colophon
title
Some Remarks About Video Art in Poland
author
Margarita Schultz
author's bio
Margarita Schultz is a professor at the Art Department of the University of Chile in Santiago. She has published over 100 articles in Latin American and European periodicals, and more than 20 books, including works on esthetics, epistemology and art history, as well as collections of poetry and short stories. She has been a speaker at many international congresses on esthetics, philosophy and new media, and has lectured at several universities in Latin America and Spain. She also founded the Interamerican School of Advanced Studies in Esthetics, organized in a series of South American countries: Chile (1999), Paraguay (2001), Brazil (2005) and Argentina (2006).

Since the 1960s, when Nam June Paik made his earlier video works, the video and art have been bound in different ways.  It might be said that the heyday of video art is now past; if high points are measured in terms of frisson alone, the 1970s, when video was at the cutting edge of artistic activity, would have to be considered the peak.  However, creators of video art continued producing works, gaining maturity and bringing increasing skill to this artistic discipline, and as a result video art has gained a singular niche in the arts. Video art has more recently found a role in so-called installations (i.e., as a component working in tandem with other visual objects), and in the last few years it has been allied with digital productions as well. 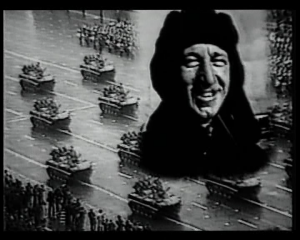 Is it possible to summarize the main features of video as art praxis?  Not a simple task, but I would like to propose a few key points as relevant: First, video art revels in short duration; second, it exhibits a lack of hard-structured narrative logic or plot, preferring a kind of imaginative looseness; third, it has mastered collage-style juxtaposition of images and scenes; and it has explored the use of both slow- and fast-motion images.

Looking for a common leitmotif among the works collected under the title From Monument to Market, I was impressed by the fact that they are mostly engaged with polemics — not only in the sense of polemos (war), but also in the wider sense of criticism (although one of the examples I have chosen indeed has war as its explicit theme).

Let us begin with Art Is Power! (Kunst ist Macht), a black-and-white video made by Józef Robakowski in 1985.  What is the central idea developed in these sequence of images?  A minor change in the title would give us Krieg ist Macht, which would amply cover the explicit subject of the work: a seemingly endless file of trucks carrying bombs — troops on parade with their rifles on their shoulders, swinging their right hands in an aesthetic white curve that underscores the uniformity of their stride — soldiers looking towards someone, invisible to the observer of the video, who surely wields military power (Macht).

The whole nine minutes video focusses on the power of war. The human has become meaningless, a mere speck, a device for killing, an anonymous piece of a faceless group. This is shown with particular impact in the shots of the troops from above. Marching along a broad street, they have become rectangles without any individuality — they are not even decipherably human, and it seems that nothing will stop them.

Music is a vital partner to the visual in this work. Distorted, military-sounding voices intone words like “lieben heiBt lieben” (to love means to love), followed by a tune of victory, imparting the most dreadful irony — the eternal lie of war, for there is no victory, only destruction. The images themselves could be viewed as fragments of a documentary film, but through the music, and the video-art context per se, they become artistic.  And thus the meaning of the title is revealed: Art is Power! Art has the power of irony, of denunciation, and the subtle but potent ability to raise consciousness.

The second work featuring the polemus leitmotif is the video entitled Atomic Love (Piotr Wyrzykowski and Iliya Chichkan, 2002). The first thing the viewer notices is that the words are written in Russian. The landscape shows high-tension electrical wires in a setting with some trees, a road, a misty day in winter.  Suddenly two individuals appear in the scene, dressed in silvery protective suiting — the kind made made to protect the wearer from something very dangerous indeed, with only a tiny “window” in the headgear to see through.  Perhaps it is due to the title — Atomic Love — that the viewer assumes that the clothes are anti-nuclear.

Who are these individuals? Where are they? The first question is answered when the individuals begin to kiss each other — a hysterical, mad kiss, through the masks covering their faces. Their movements are awkward and lumbering, like bears; nothing human — no skin, no body part — is visible.  Their love is a parody of love, amid silence, destruction and deserted streets.  In this apocalyptic vision of a devastated city, the humans carry on with continue their impossible love, trying different positions as if it were a bitter Kama Sutra.

It’s easy to think of Chernobyl, mainly because of the Russian words and the anti-nuclear garb.  And at the end of the video the word Chernobyl appears, with the fateful hour 13:09 — the hour of the explosion.

The visual language of this video has no tricks; the role of the camera is almost that of an eyewitness. And this work doesn’t need tricks: The pathetic love of these clumsy human bears in protective clothing is powerful enough in itself.  Where Judeo-Christian culture tells of a couple in Paradise at the very beginning of humanity, this video shows us a couple of this video is at humanity’s very end, in the Chernobyl Hell. 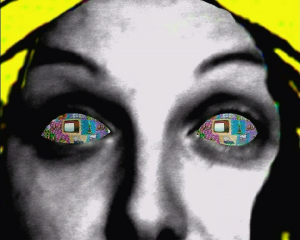 Another video work in the collection — Faster, Easier (by Monika Grzesiewska, 2001) — is also related to the polemos theme, although perhaps less evidently.  Faster, easier, faster, easier, faster, easier — this is the sound of the gears of a machine to which women around the world are chained.  The supermarket is the new Paradise paradigm.  Consumerism is the air that millions of women are breathing; it’s also what they get drunk on, to forget their solitude and the emptiness of their lives. This video stuns the viewer indirectly, with the blunt instrument of irony: in the form of the presentation, in the background to the images, in the digital-like texture.  And irony is a weapon – this is polemos again.  The victims of Faster, Easier endure for years, partly alive, partly dead.